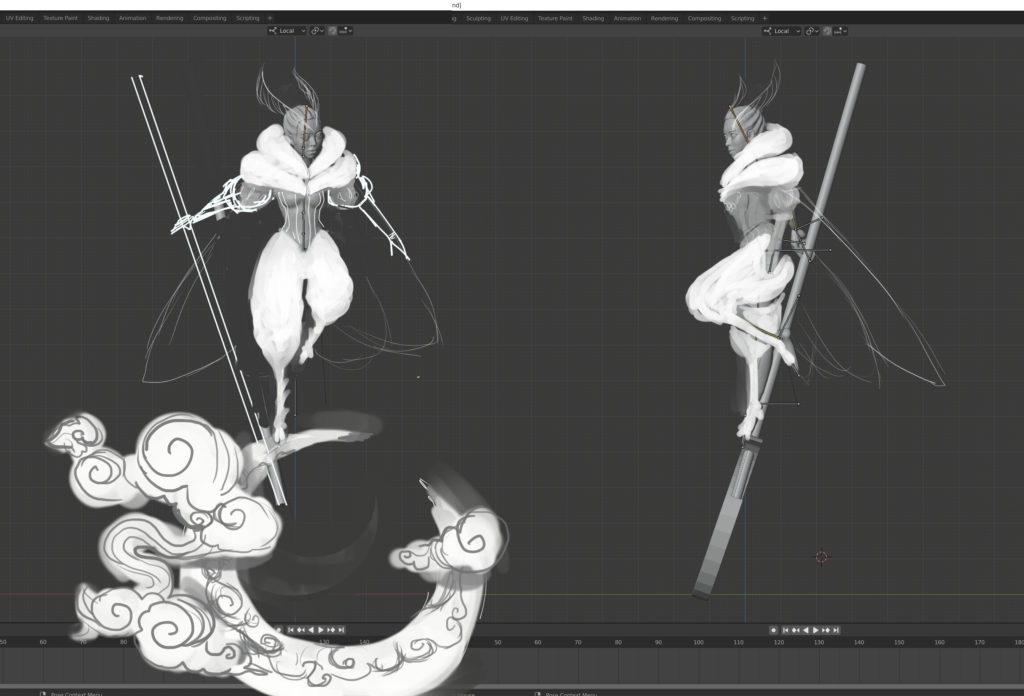 Hello again! I’m Andrea Lam, 2D artist and part of the CobraMode team. I work with my husband Erin McClellan, the 3D character sculptor and visionary behind our minis, along with Ben Green (5e Statsmaker), TheBetaMarie (bases and terrain artist), Paul Ferret (Concept Artist), and Kittifizz (our newest terrain artist)!

This is Part II in a three-part series that goes through our creative process for creating Psychidae, the Noctuoidea Mage, from start to finish.

If you missed it, make sure to check out Part I, the Inspiration and Concept stage! If you’re interested in downloading this model, it’s available in the Welcome Pack of our Patreon, or for individual sale on MyMiniFactory. 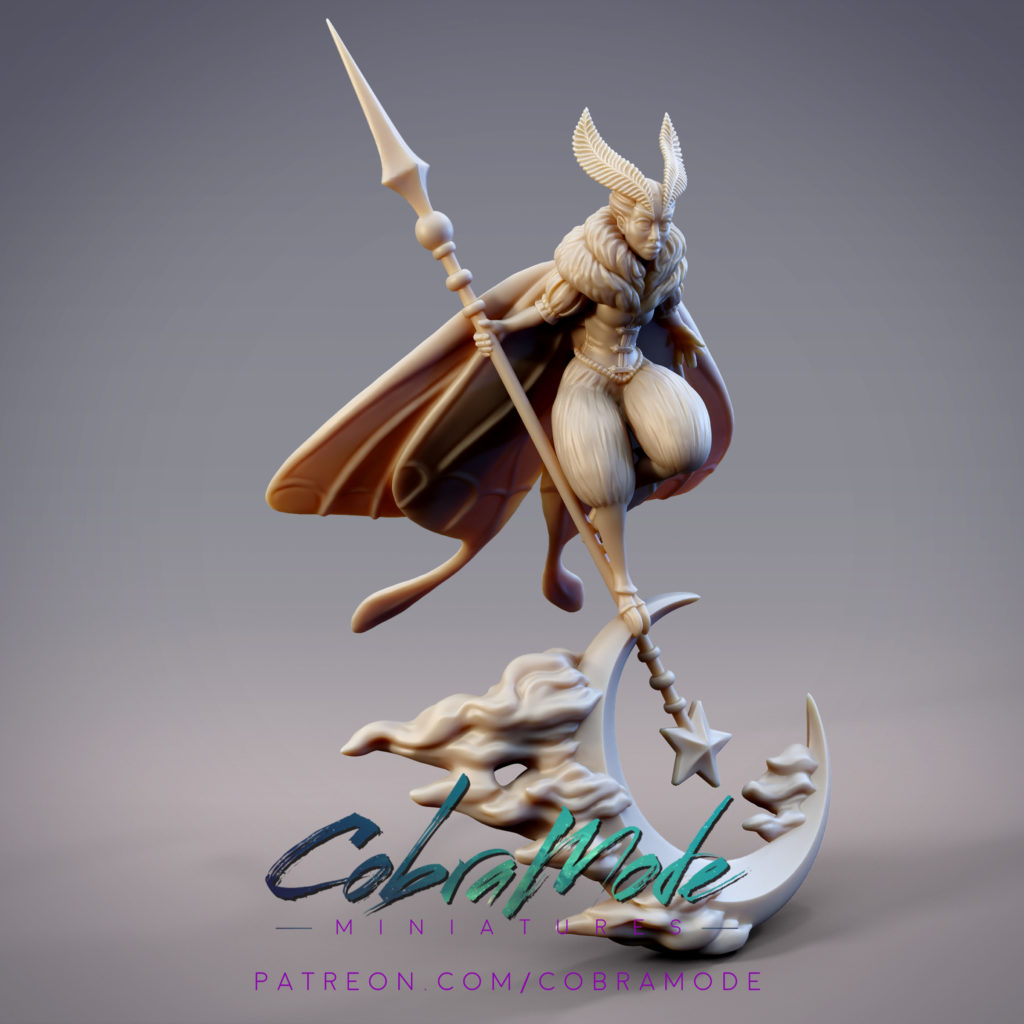 I call this phase “3D Sketching” because it’s a rough draft stage in 3D. Erin previously made a mannequin female body and rigged it in Blender, so he quickly made some a basic staff, put in the rigged mannequin, and let me pose it the way I envisioned in my sketch. This stage of the creative process is all about translating the visual feel of the thumbnail into a 3D object. 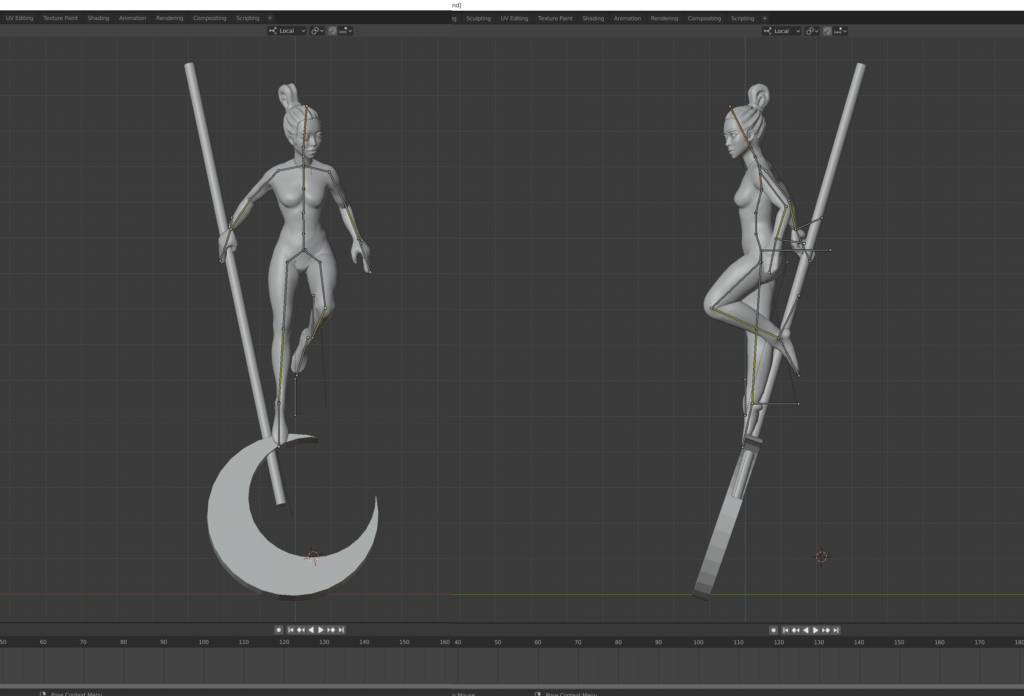 I have a hard time with the controls in 3D software, so it was difficult to pose the 3D mannequin to match my vision. I got it as close as I could and then took some screenshots so I could draw on top of them. When I was drawing on top of the model, I was better able to correct the pose and add on the shapes of the clothes. I also tried a few clothing variations just for fun, but the variants didn’t hit the shape of the silhouette from our chosen thumbnail. Throughout this process, I am referring back to the initial thumbnail that first caught our eye, because the outline, shape, forms, and proportions of it should be matched to our final 3D model. 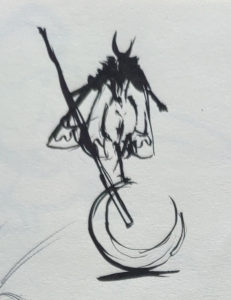 The thumbnail we chose

I did about 5 different variants, some of which will be useful for other characters down the road! 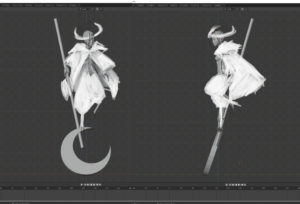 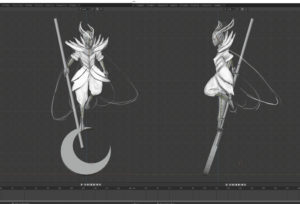 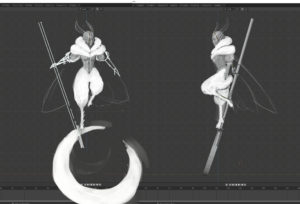 Erin had the idea to add some mist or smoke coming off the blade, so here I’ve done an Asian-inspired wispy cloud just to see what it would look like. We ended up changing it to a more realistic looking mist later on.

There was quite a bit of back and forth in the posing of Psychidae. I really insisted that she have a specific pose – I wanted her to look like she was lightly floating down to land on the edge of her weapon. In any kind of still character art, the pose is extremely important. In my opinion, the subtleties of the pose will determine who the character is. Are they sneaky and furtive, or bold and heroic? The pose will tell you this information instantly. This is even more important for artworks where the end product will be very small. The final print was intended for 32mm scale, and anyone looking at it would have to pick it up to admire the details of the clothing and face, for example. But the pose and silhouette will be immediately obvious to anyone looking at the mini.

Erin and I have a lot of discussions about poses and the subtleties of each part of the body. For example, Erin took my initial posing of Psychidae and made some changes that he felt pushed the concept more. While I agreed the pose needed to get pushed, I thought that he had actually moved the body in the opposite direction! Erin had given her a more upright, arched back, but I felt that this made the sense of momentum push forward instead of down. It looked more like she was pushing off to spin around the pole of the staff kind of like a pole dancer, which I didn’t think matched with her character. If we went back to our original key words (peaceful, calm, mysterious, hidden, frightening, secretive), that pose didn’t match any of them. To me, the pose looked Active, Aggressive, Bold, and Flashy, which is the total opposite of what we were trying to achieve with her.

I don’t have anything against pole dancers, but I think it has to make sense for the character. I made a couple quick sketches to show what I was thinking for her pose, and Erin agreed that it fit the character much better and gave a more interesting feel. I even gave direction on the position of her fingers on the free hand, to heighten the sense of lightness and fluttering.

(As an aside, I feel like there are a lot of sexy female characters everywhere, and while there is nothing wrong with sexy ladies, it’s really a missed opportunity to default to “sexy” automatically when the character is a woman. My foremost concern is always to convey strong character design, and “sexy (whatever)” is so overused that it dilutes your character concept. /Rant) 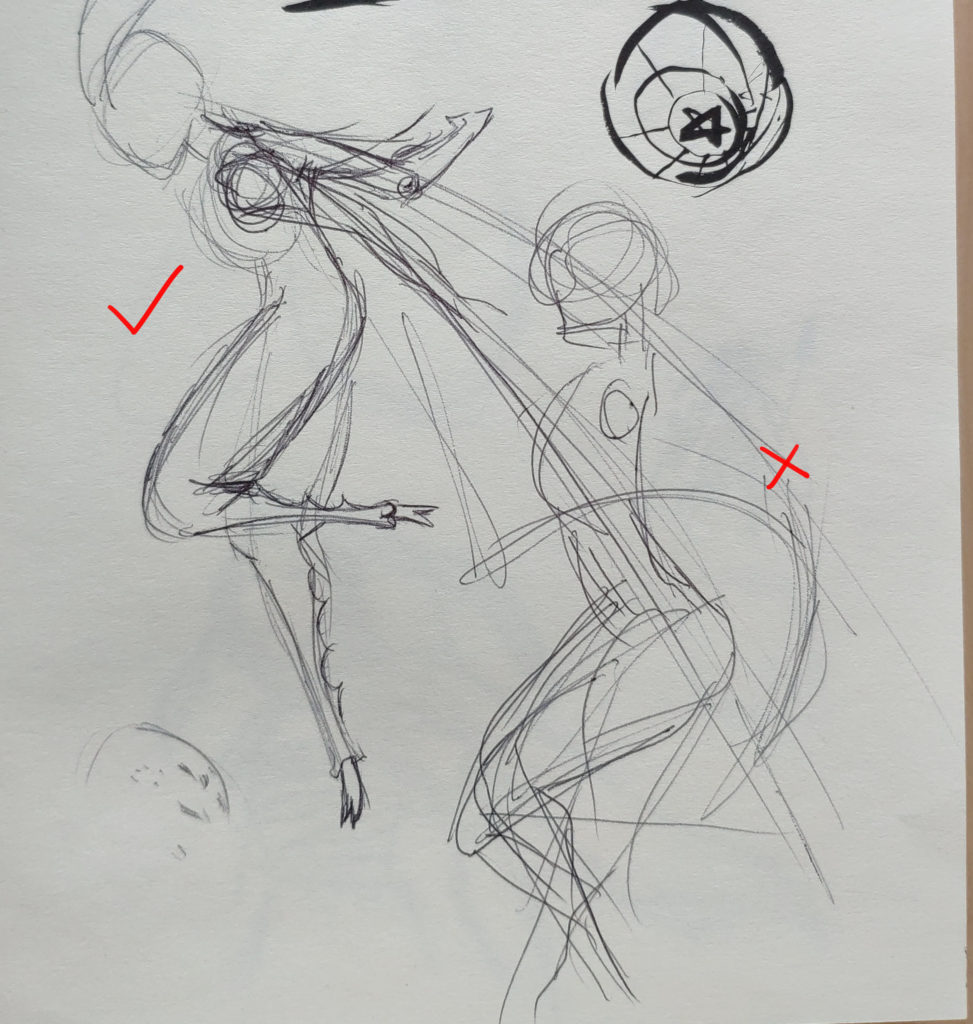 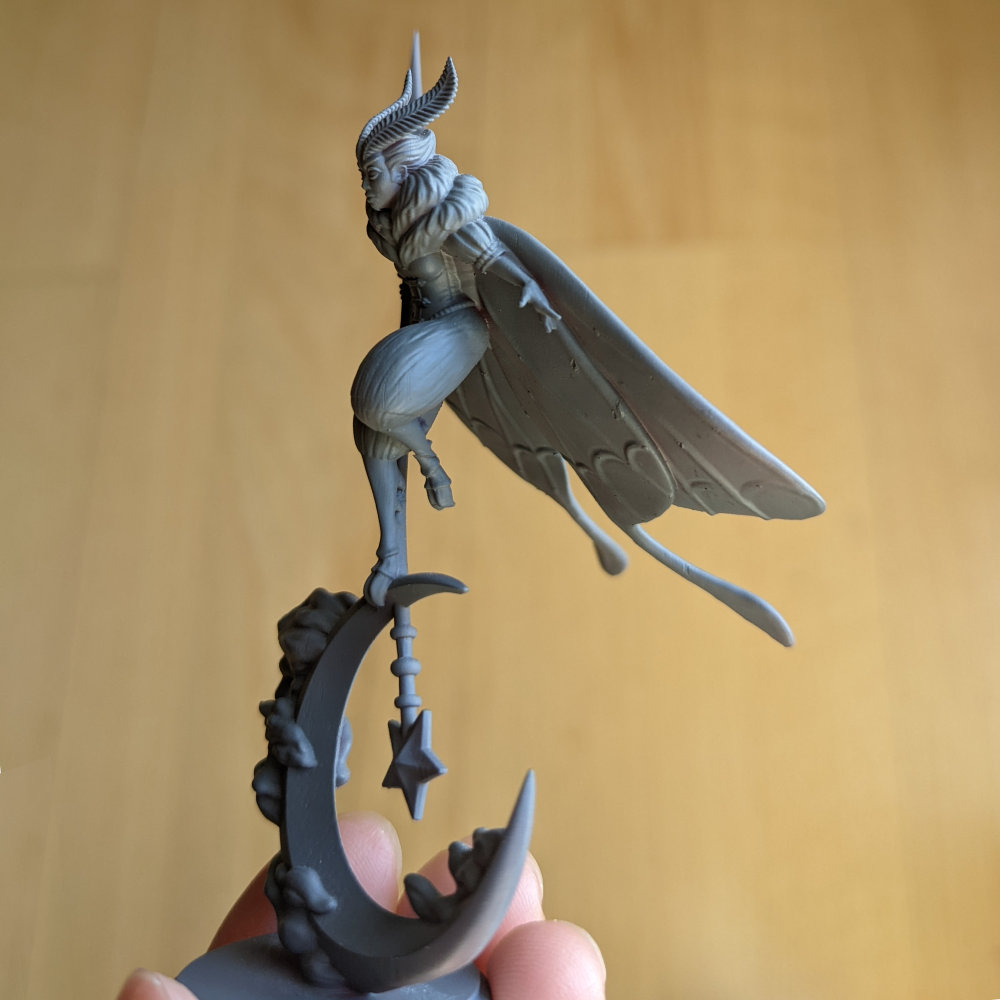 I had a fairly traditional education in drawing from college, so I’ve done a lot of nude life drawings. When you make life drawings, pose is not just about positioning a body in a certain way, it is also about conveying a sense of weight, balance, and movement (or stillness, depending on the pose). It’s a very different approach from most 3D artists who are posing a rigged mannequin, or even just moving the different parts of the model manually. A 3D model doesn’t have to balance its weight, or move to get in and out of the pose. When you are used to seeing a human move in and out of poses and shift their body weight around in order to balance, then you will start to understand subtleties that make a pose look more natural or show the direction of motion. And usually it’s best to just have a real person try to get into the pose and see what it looks like. For the hand position, I put my hand and arm in the position I wanted, so Erin could clearly see what I’m talking about. Erin took pictures from a few different angles to keep as reference images, and then followed them while sculpting to keep the pose from feeling stiff or awkward. I like to think that this attention to subtlety is something that sets CobraMode apart from other mini designers, and gives our minis a more life-like feeling.

Once we’re done with the 3D sketch, it was time to get to the meat of the project. Next post, we’ll talk about Erin’s favorite part, Sculpting and Polishing!

Did this post inspire you to print and paint your own version of Psychidae? Grab the STL from our MyMiniFactory store! https://www.myminifactory.com/object/3d-print-123277

See you next time!