Hello everyone, Andrea here! I’m the 2d artist and manager for CobraMode, and my husband Erin is the lead sculptor of our team. Since we started the Patreon in 2020, we’ve grown our team to include a concept artist (Paul Ferret), and a freelance 3d artist (TheBetaMarie), as well as a 5E Stats team (Ben Green, Liam, and Julia). But our process has still remained very similar to how it was when we first started, so I thought I’d refresh this blog post to give our newer fans a behind-the-scenes look at our creative process, and how we come up with our wild and weird minis.

Today we’re going to look at the concept design process for Psychidea, Noctuoidea Mage, one of our classic designs that is now in the Welcome Pack when you join the Patreon. (She’s also available for purchase on MyMiniFactory.com). This will be a three part series showing the development process for Psychidae, and how Erin and I work together to create the final product. 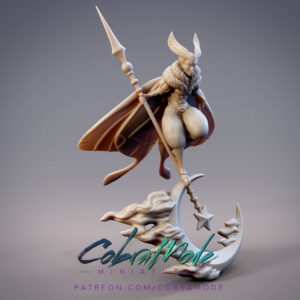 Our Patreon started off with anthropomorphic characters, but Erin worried that we’d get pigeon-holed doing just animal characters. He really wanted to create something more human-esque to show variation. We brainstormed ideas and settled on a Lunar Mage. Normally Erin starts with a concept he’s already been ruminating on, and make a rough 3D sketch. Then we bounce ideas back and forth, I’ll give my opinion on how to push the concept further, find reference images, and make rough sketches for him to work from. He actually got very far into a lunar mage character. But as he kept working on the details of her clothing and armor, it kept getting further and further away from our original idea of a mage. We were caught up in aesthetic details but couldn’t envision what kind of faction the mage would belong to, and how we would create a whole society around her with other characters. Our initial design felt visually confused, was missing some essential cool factor, and we couldn’t see how she’d fit into an entire faction.

We decided to go back to the drawing board and come up with some key words as a starting point. The key words for the mage were “peaceful, calm, mysterious, hidden, frightening, secretive”. We also came up with some motifs and symbols to draw from that were related to the moon and night; circles, owls, wolves, crescents, and moths. We thought about where the character lives; in a Twilight Forest that is always dark and creepy. Using this character background as a guideline, I made a few tiny sketches to try out the ideas – in concept art circles, this is called thumbnailing. The idea is to look for interesting silhouettes or shapes without getting too bogged down in details of what the character is wearing, anatomy, etc. While I was thumbnailing, I was looking at reference images related to our key words and motifs to get ideas from the natural world, and characters from other minis, video games, anime, or television/movies. For example, my main inspirations were the moth girl from Berserk, and Venezuelan Poodle Moths. I blocked out some silhouettes that were roughly inspired by images from google image search. I shared these reference images with Erin so that he’d have an understanding of what my tiny sketches are trying to show. 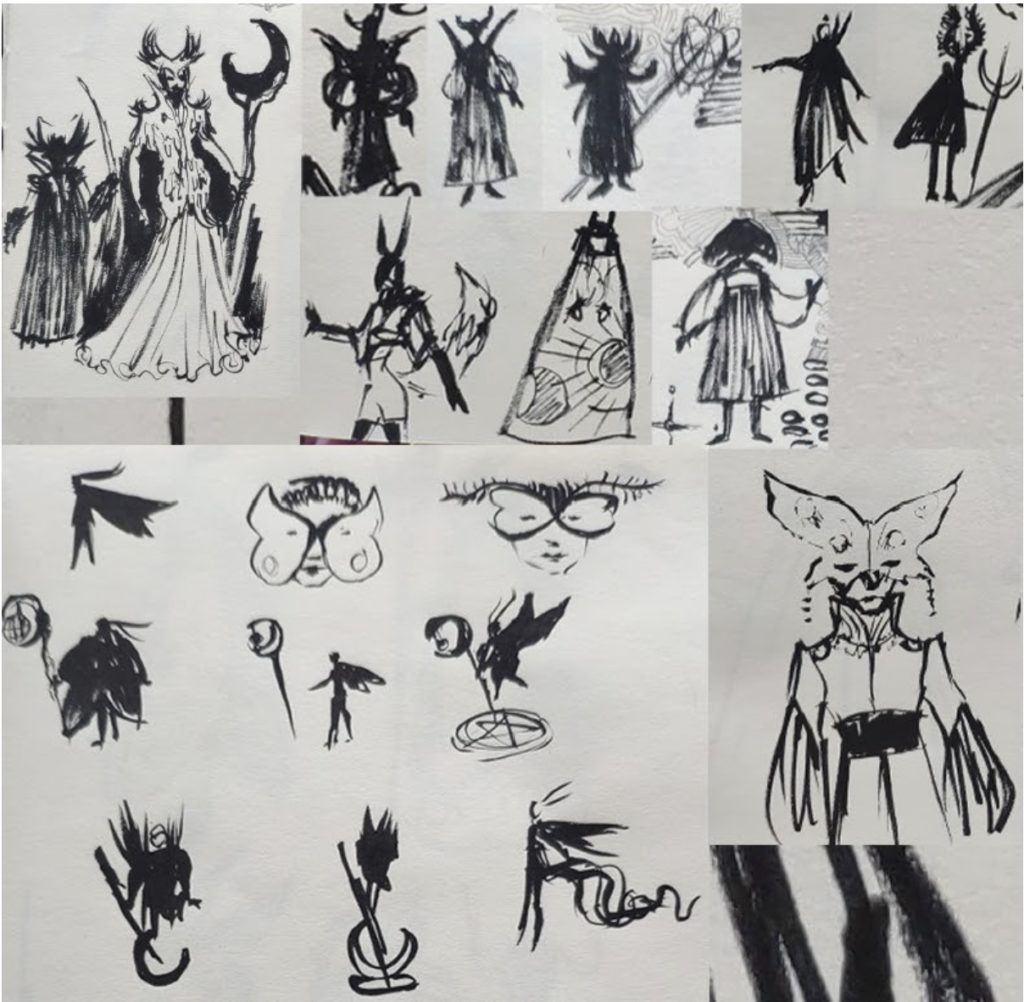 I use a brush pen to do these sketches, because it’s big and messy. A regular pen or pencil tempts me to fill in small details, or erase and rework the same sketch. But the point of thumbnailing is to toss out many ideas, look over all of them, and then pick and choose from the best ones. Sometimes it might take me 50 thumbnails to hit on anything, but in this case I hit on something fairly early. I would do a few sketches, show them to Erin, get his feedback about things he liked, and then iterate from there. I did a few larger sketches to help me get a feel for the character or to put down any stray ideas I had, but they were quick and dirty rather than beautiful concept art. It’s kind of embarrassing for me to even show the process sketches, because I really just throw them down to get the ideas out, and more often than not, they’re just dumb-looking. But that’s the whole point of them! You’re trying to generate a lot of ideas, even if they might seem like crap. One of my teachers described it as vomiting up everything you have (good or bad), and then picking through it to find the good stuff. Haha! Gross, but memorable. 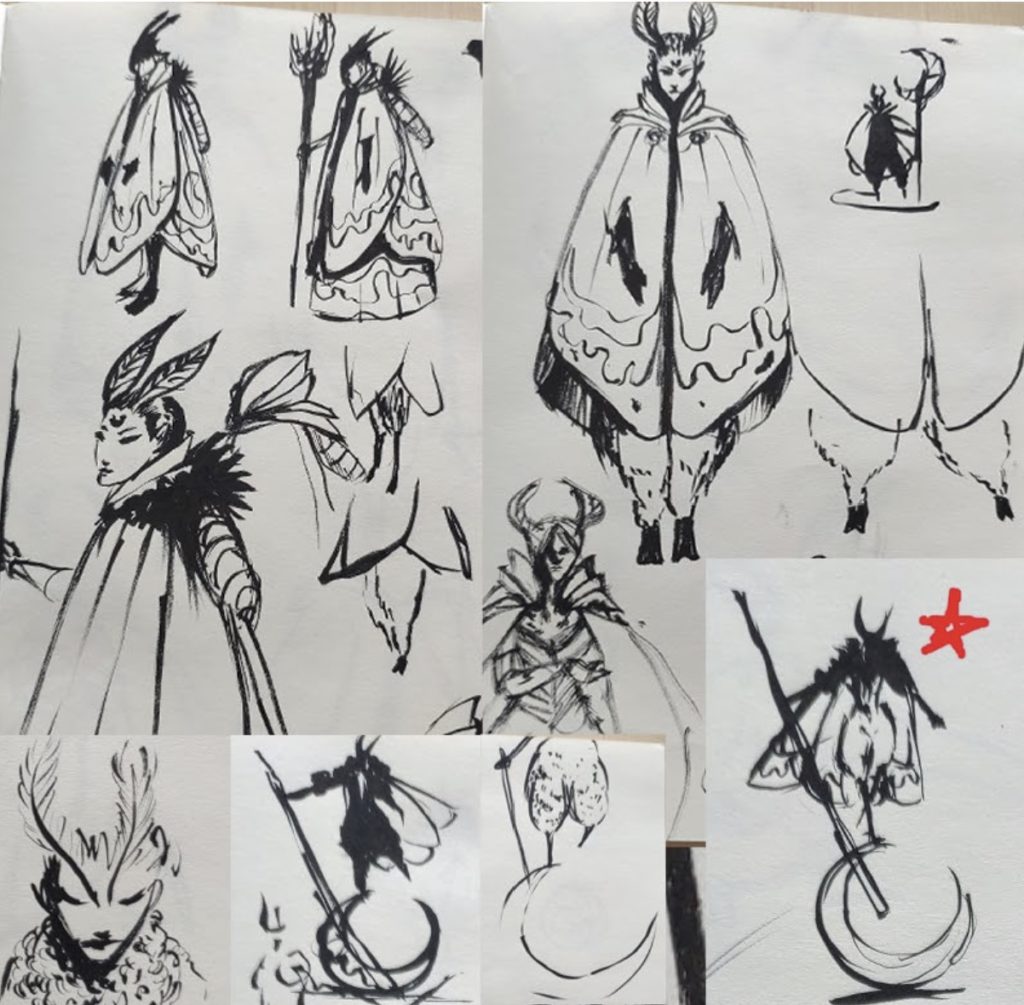 We ended up with the red-starred thumbnail as our favorite! Since Erin and I work together so closely, and Erin has so many ideas of his own to add, I don’t have to give him a 100% complete illustration. This creative process is very collaborative and requires a ton of communication, which makes it unique and difficult to replicate. Normally a concept artist would be giving a fairly complete illustration to a 3D artist, who then translates it into a sculpt. Or a 3D artist comes up with the concept fully and doesn’t consult with anyone else. But with our process, Erin has much more input in the vision and outcome of the character without the pressure of constantly coming up with new ideas. And I don’t have to spend a ton of time on making clean drawings. It works out really well for us!

This stage of the process was actually the longest part. We thought about the lunar mage on and off for almost 2 weeks, discussing the background for the whole faction as well as the character, and then nailing down a silhouette. We really strive to push our designs further, because we want to create stuff that is unique and a little unexpected. Of course, this means that Erin and I drive each other insane with our critiques! But in the end, it truly makes for a better sculpt.

Once we got something that really excited us, it was time to figure out how to get it in 3D! Next post, we’ll cover Phase 2, the 3D sketch…